Give Pundit a try! 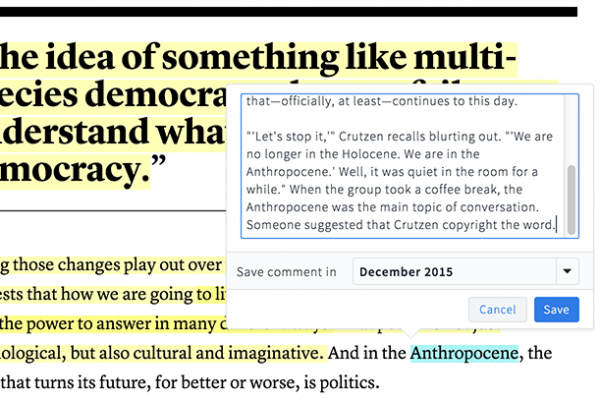 A lot of things have happened in the last months in the StoM project, as far as PunditBrain is concerned.

First of all we decided to… drop the name “PunditBrain” for good! From now on, the web annotation service will be simply known as Pundit. Our homonymous annotation client has in fact gathered quite a bit of attention and followers during the years and it makes sense to capitalize on its brand rather than to launch a new name. The PunditBrain term will be only used in StoM, but all development Net7 and its partners does and will do on web annotations will be released under the Pundit brand only.

The Pundit ecosystem has seen a lot of significant improvements, many of those developed in the course of StoM. First of all, the new Pundit Annotator has been publicly released as a Chrome Extension. Despite using “behind” the same semantic model of the traditional Pundit client, this new tool presents a simpler and slicker interface to better satisfy the need of general users who need to annotate web pages quickly. It allows in fact to highlight and comment parts of text in any web page with a few clicks.

Moreover a new web app, the Pundit Dashboard, has been also released. It consists of an online platform where users can review and manage all the annotations, highlights and comments created with Pundit. From here, it is also possible to export and download the annotations included in a notebook into an ODT document, to be used off-line on a personal computer.

Finally, the traditional, semantic-powered and fully fledged Pundit client, now renamed, Pundit Annotator Pro, has seen a significant set of improvements. This tool is intended for researchers and professionals who – besides using highlights and comments – want to create semantic annotations using, as subjects or objects of a “triple”, part of text in a page or the whole web page itself. The Chrome Extension comes with a default set of predicates and allows to link text and pages to DBpedia resources, therefore creating annotations that become part of the Linked Open Data cloud.

Significant works have been performed to improve the user interface of the Pundit tools, with a new coherent and elegant design and improved usability: also more features are coming soon, including support for JSON-LD for annotations export, integration with Spazio Dati’s Dandelion API, to automatically identify concepts in a web page and to link them to Wikipedia entities, ready-made visualization widgets and social functionalities, to enable users to reply to or to explicitly “like” an annotation. In the meantime please give Pundit a try and let us have your feedbacks.